The Nevada Department of Education (NDE) has developed a framework to measure individual school performance in important educational areas.  The Nevada School Performance Framework (NSPF) was developed to comply with the Every Student Succeeds Act (ESSA) to “meaningfully differentiate” schools based on the following performance indicators:

Each performance indicator is comprised of various measures.

Each school year, the NDE will release a star rating for each school based on an index score.  Each performance indicator has a point value. Schools will earn points on each indicator based on their performance, and schools can earn between 0 and 100 points on the NSPF School Rating Report.  Refer to the Point Attribution Tables for information on how schools earn points. 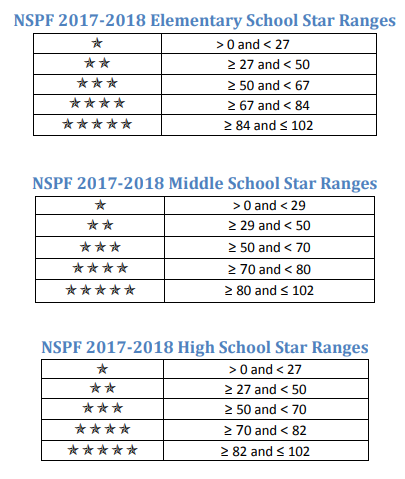 A school’s star rating is determined by the total index score earned.

What does a star rating mean?

Changes to the framework:

The following changes were implemented for the 2017-2018 Nevada School Performance Framework: